Blog
Home»About Us»Blog»HARD WATER - The damage it causes your appliances.

HARD WATER - The damage it causes your appliances.

They just don’t make things like they used to.

You’ve probably muttered a statement like that when replacing a washing machine that kicked the bucket, calling a service tech to repair your dishwasher, or had a water heater leak all over the floor.

There is something you can do to ensure your water-using appliances have a nice long life.

It starts with identifying the problem, and in many cases, the problem is hard water.

Here’s why so many appliances end up in the junkyard before their time.

How Hard Water Ruins Your Appliances

Calcium and magnesium are good for healthy bones, but they are the bad guys when it comes to certain appliances in your home.

Those minerals are what make water hard. They’re also responsible for what’s known as scale buildup or mineral deposits.

Scale from hard water can clog plumbing, and it damages your water-consuming appliances, wearing them down over time. They become less and less effective until eventually they break down.

However, since water softeners remove those hard minerals, treated water doesn’t leave behind the scaly build up that harms appliances.

The Water Quality Association (WQA) commissioned a study in 2009 examining the impact of hard water on typical household appliances and fixtures. See some of the results below. (Read the complete Battelle study online)

It’s plain to see how hard water can ruin appliances. The WQA research indicates hard water damage takes years off the life of dishwashers and washing machines. Having a water softener in your home helps protect these costly appliances.

WQA researchers also found that with soft water, appliances need to use less soap and detergent and can be run at lower temperatures, yet be just as effective.

Detergent use dropped by 50% in washing machines with soft water, and you could save as much as 70% on dishwasher detergent.

With softened water, tests showed washing machines could run with a water temperature of 60 degrees instead of 100 degrees and still remove tough stains. Depending on the stain, eliminating the hardness in water could improve removal by 100%.

If hard water is being run through those appliances, their efficiency is going to decrease dramatically as months and years go by. That means you aren’t actually getting the energy savings you think you are.

With soft water, appliances like dishwashers and washing machines are much more likely to retain the original factory efficiency rating for an extended time.

Most of us don’t actually pay much attention to appliance manuals, but if you did, you’d see many of them recommend using treated water for the best performance. In fact, the warranties for some high efficiency models are void if you’re using them with hard water.

A water softener can also reduce your home’s carbon footprint. That’s because they not only help appliances run on less energy, the treated water allows you to use less soap and detergent as well. Detergent has a number of negative environmental effects and pollutes the water.

The Most Expensive Hard Water Problem for Homeowners

According to the Department of Energy, heating water accounts for 14% to 18% of the energy costs in your home, and it could be as high as 25%.

That’s a pretty big chunk of your utility bill!

Water heating is second only to heating your actual home when it comes to energy use. So it stands to reason that you’ll want your water heater to be running efficiently. 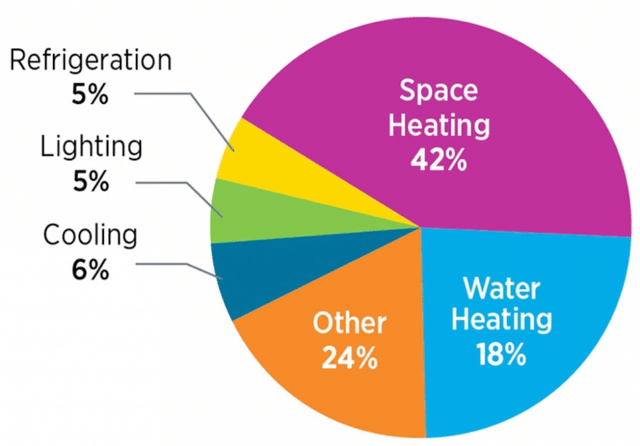 The best way to do that is to make sure your water heater is on soft water. An efficient water heater can save you as much as 29% per year on water heating costs.

The 2009 WQA study indicates soft water has a very positive impact on the lifespan of water heaters.

“As for water heaters, the researchers found that when they used softened water, the units maintained their original factory efficiency rating for as long as 15 years.”

On the other hand, if your home has hard water, it doesn’t matter if you’ve got a gas water heater, electric water heater, or a tankless water heater … the results of testing show they won’t last nearly as long or run as efficiently.

“Running hard water through the units cut efficiency by up to 48 percent. Scale buildup shortened the lifespan of the heating elements inside electric water heaters, and some tankless water heaters using hard water failed after just 1.6 years.”

In fact, not a single water heater operating with hard water even made it to the end of the testing before it broke down!

Check out the lifespan of water heaters using hard water below. That scaly buildup means you’ll be shivering in the shower and getting a new one in half the time.

More About How a Water Softener Can Help

Hard water can cause a lot of other issues in your home. You can read about 8 hard water problems or the effects of hard water vs. soft water on your skin here on our blog.

Soft water will make your life a lot easier and has the potential to help you save money as well as energy.

Back to Previous Page
Back to News & Events